Connections for Children Celebrates over 40 Years of Service!

From its beginnings, Connections for Children has been at the forefront in recognizing the vital importance of supporting families in providing early childhood experiences for children that cultivate the seeds to success in school and in life. Today, Connections for Children has more than 35 employees and serves more than 3,000 children every year. Its service area extends from Malibu to Palos Verdes Peninsula and encompasses 14 cities in the Westside and South Bay. 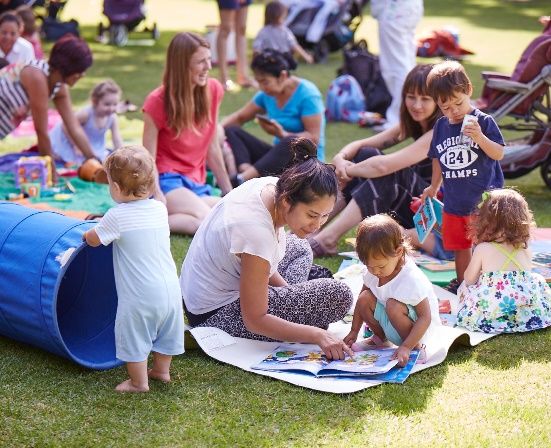 Connections for Children started as a volunteer grassroots effort in 1975 at a time when women were beginning to enter the workforce in greater numbers. But parents had few resources to turn to in order to make sure that their children were not only properly cared for but also fully nourished in a way that enhanced their chances to learn and grow.

There from the beginning was a small group of visionary leaders, including Ida Bucher, Betsy Hiteshew, Laurie Rozet and June Solnit Sale. These founders at first created Child Care Information Services, which operated as a project of Family Services of Santa Monica. Real estate developer Doug Pardee made a significant donation to boost this new program.

Rozet became its first executive director, volunteering her time and working out of a tiny backroom at Family Services with a staff of just two volunteers.

“Most centers at that time did not enroll infants and toddlers,” Sale said. “Laurie took the leadership in contacting various agencies and grant-givers.” Soon, Sale said, Connections for Children became an important resource in developing innovative programs that supported quality child care.

In 1975, the City of Santa Monica granted seed money to develop child care resource and referral services for areas within the city. At the same time, state legislation created a permanent funding stream.

In 1977, services were extended to communities from Pacific Palisades to Redondo Beach. The new program grew quickly, with the introduction of Preschool in the Park (now Family Time); training workshops for centers and home-based child care providers; lunchtime chats about quality child care, and a toy library in a van that visited child care sites.

By the early 1980s, the program — now known as Connections for Children — became an independent nonprofit.

Former CFC board member Terry Ogawa, who was Connections for Children’s executive director from the mid-1980s to the mid-1990s and later served on the Board of Directors, oversaw tremendous growth in the organization.

“It was a time when employers began to recognize the importance of quality child care, which led to enhanced referral services, parent education and other family-friendly programs,” Ogawa said recently.

In 2001, CFC became one of the first organizations funded by First 5 LA, a leading early childhood advocate created in 1998 to invest Los Angeles County’s allocation of funds from California’s Proposition 10 tobacco tax.

“Today, the importance of high-quality early learning is a national priority, uniting leaders across the political spectrum,” Oblath said. This was demonstrated by the overwhelming bipartisan support in 2014 for reauthorization of the Child Care and Development Block Grant and expansion of Early Head Start. “These measures make strong commitments to safe, high-quality early care and education,” Oblath said.

For CFC, this has led to an involvement in new direct services with the Metro-West Early Head Start Child Care Partnership and the ability to again serve many more children and families.

As CFC co-founder Hiteshew said: “The future of early childhood education is in the development of universal preschool and a curriculum that addresses the needs of the whole child.”

CFC continues to move forward with energy and innovation so that all of our community’s children can realize their full potential.