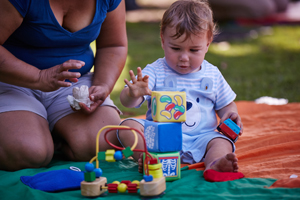 According to Dictionary.com, play is defined as “exercise or activity for amusement or recreation.” Yet, it's not just a reason for children to have "fun"; instead, it's an activity where they can gain the mental and social skills necessary for continual growth into adulthood. Aside from the tons of research that proves this, the positive effects of play can easily be viewed on the happy faces of children. Although there are many, this piece will focus on how play benefits the learning, mental health and social skills of children.

Research has shown that there's a connection between early childhood experiences and brain development. In "Scientists Say Child's Play Helps Build A Better Brain", researcher Dr. Sergio Pellis indicates that play allows connections in the "prefrontal cortex during childhood that help wire up the brain's executive control center" which "has a critical role in regulating emotions, making plans and solving problems," thus preparing the "young brain for life, love and even schoolwork." Though it can go unnoticed by parents, teachers or the children themselves, disrupting play can result in the decline of brain development. Kenneth R. Ginsburg, MD, MSEd, author of "The Importance of Play in Promoting Healthy Child Development and Maintaining Strong Parent-Child Bonds", states that when play is reduced in school - a trend happening more and more often to make room for reading and mathematics - this "may have implications on children’s ability to store new information, because children’s cognitive capacity is enhanced by a clear-cut and significant change in activity."

Before the excitement started in "The Cat in the Hat" by Dr. Seuss, the children, Sally and her brother, sat lifeless in front of a window, watching the rain fall. Once the silly cat arrived and began playing with them, their attitudes changed. This classic story is a perfect example of what happens to the mental health of children when play is missing from their lives. Peter Gray, author of "The Decline of Play and Rise in Children's Mental Disorders", finds that children’s lack of play causes their emotional development to suffer, leading to increased anxiety and depression, reduced sense of personal control, and increased narcissism. Gray lists several reasons for the decline of play, including the heavy level of academia in kindergarten and preschools (which has grown over the years), the fearfulness of parents to allow their children to play outdoors and increased screen time use. However, when play is introduced, particularly free play, children “develop intrinsic interests and competencies; learn how to make decisions, solve problems, exert self-control, and follow rules; learn to regulate their emotions; make friends and learn to get along with others as equals; and experience joy.” These components have the ability to produce a positive impact on their mental health at a young age, which will certainly follow them into adulthood.

Babies are born ready to socialize; you won’t come across a baby that’s unable to make a friend. But, as some children get older, they have a harder time fitting in. This is where play comes in. Gray states that “play is children’s natural means of making friends. It is what draws them and binds them together. Even among adults, a playful attitude, focused on intrinsic goals, promotes and nurtures friendships.” Speaking from personal experience, the friends you make in the schoolyards and playgrounds at a young age become long-lasting relationships well into adulthood. Parents.com relates that play “improves children's social skills as well, by helping them to learn how to work in groups, to share, to negotiate, to resolve conflicts, and to learn self-advocacy skills.” In a study conducted to gauge the happiness and unhappiness levels of middle and high school students, which was analyzed by Gray, it was found that “the highest levels occurred when they were out of school and conversing or playing with friends.” Gray goes on to state that the decline in play leads to social isolation and loneliness. Friendships help boost social skills, enrich our lives and self-esteem, and act as valuable roles in our overall development.

Of late, the decline of play in schools has been newsworthy. More and more preschools are transitioning from play-based experiences to those more academic-in-nature. While every child certainly requires a structured setting aimed at preparing them for kindergarten and beyond, research has proven that reduced play does not favor a child’s development. This fall, my twin boys will be starting at a primarily-outdoors preschool that promotes early learning through intellectual development, with an emphasis on play and socialization. Even though they are very social toddlers, my wife and I believe it will only benefit them to attend a school that focuses on both early learning and play, while getting a little fresh air in the process. There is innumerable research out there that highlights the short and long-term benefits of play, but the truth is, it’s up to the parents discretion to choose the best learning philosophy for their children.

If you're undecided regarding the type of preschool you'd like your little one(s) to attend, this link offers a description of the main philosophies: "Comparing Preschool Philosophies: Play-Based vs. Academic".