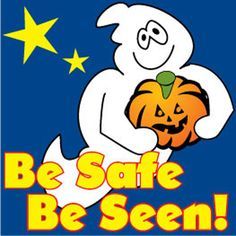 As Halloween approaches, children look forward to the big C's: costumes and candy. In the months, weeks, and even days prior, they'll change their mind multiple times when it comes to a costume (especially when a certain uber-popular film/space opera is scheduled for a rebooted release), and map out the houses that offer the best candy. Finally, Halloween arrives and they can finally wear THE costume and go trick-or-treating. Because Halloween is really the one day of the year that people can be anybody they want to be, some find it necessary to push constraint aside and simply act dangerously. Safety comes first, and the biggest concerns (and most widely discussed) on Halloween involve pedestrian accidents and tainted candy.

According to PR Newswire and Safe Kids Worldwide, “twice as many children are hit and killed by cars between the hours of 4pm and 10pm on Halloween compared to the same timeframe on any other day of the year.” When it comes to pedestrian safety, here are the basics: children should walk on the sidewalk, look both directions before crossing, and carry a flashlight or wear reflective tape to be easily visible at night. PRN Newswire also recommends that parents “avoid costumes that could cause children to trip, such as baggy pants, long hems, high heels, and oversized shoes” and “avoid costumes that obstruct the child’s sight or vision” such as wearing a mask.

When I was a kid, candy tampering of any kind was not a “thing.” Why would somebody purposefully hand out harmful candy on one of the most magical days of the year? It’s rare, but it happens. In a recent Los Angeles Times article by Joseph Serna titled "Trick or treat? Here’s how to avoid drug-laced candy on Halloween", a few tips are given (courtesy of the Los Angeles Police Department) to ensure that the treats are safe to eat:

*All fruit should be cut and examined.

*Homemade treats should come from only someone the children and parents know.

*Make sure candy comes in its original, sealed packaging. Anything with holes or that appears tampered with should be discarded.

*Look for tell-tale signs that a candy is laced with marijuana. The packaging may look like a commercial brand candy but might have green packaging, a marijuana leaf emblem or the word “medicinal” somewhere on it. Drinks may also appear similar to sodas like Mountain Dew. Marijuana-laced candy includes goldfish and gummy bears.

Halloween is a fun night, and those who partake in the festivities should have a great time. The excitement and anticipation of All Hallows Eve should be remembered and cherished. Unfortunately, some may not feel the same way. As the old age saying goes, “you just never know.” I hope that these tips help prepare other parents for potential hazards on Halloween, rather than sway them from completely forgoing it. Now, go out and have a SPOOCTACULARLY SAFE Halloween!